“funky” does not describe a microscopic studio flat in Fulham fit only for a self-hating wasp, a coffee table shaped like the designer’s ball-bag, or a publicity-seeking client’s latest piece of gaudy tat assembled by a foetus in south Asia.

“Funky” is a description of the music made by LSD-addled space-dudes who wear boots so towering they’d make a steeplejack puke from acrophobia, and whose trousers are tight, sparkly and bulge alarmingly at the crotch.

Funk blasts from the lungs of hottie-babes who have never, ever covered their flamingo-length legs with a skirt larger than a wet wipe, and who appear to be competing with each other to be the first to cultivate an afro the size of the Death Star.

Funk is dirty, stinking soul: the music of Parliament, Chaka Khan and Sly Stone, not the Black Eyed Peas, Gwen Stefani and the Red Hot Chili Peppers. Simply hanging out with Pharrell Williams won’t earn you the funk-key to the funkatorium, where melody and harmony take a back seat while oily percussion and riffing horns do their sexy thang up front.

Playing slap-bass or a wah-wah guitar isn’t enough to gain permission to land on Planet Funk. You must also be able to grunt a single “HURGH!” to make everyone within a three-mile radius begin to dance crotch-first. And you’ll need to be wearing absolutely massive sunglasses and a silver cape while juddering back and forth across a stage to a stripped-down, honking groove that goes on for three minutes past forever.

There is liberation in funk. And drugs and free love. There are also politics and empowerment. That’s why it’s so goddamn funky.

A closer listen: Sly and the Family Stone

If you don’t already know and love this lot of psychedelic soul-rock funksters, you should be ashamed of yourself. No music collection is complete without at least one Family Stone album. Start with the 1970 greatest hits package, which cherry-picks from the band’s early long players and one-off singles and is probably the finest 40 minutes of pop ever compiled. I Want to Take You Higher, Fun, Thank You (Falettinme Be Mice Elf Agin)… every track is a masterpiece. 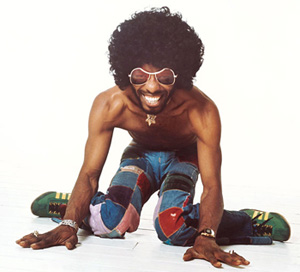 But the multi-racial, mixed-gender combo’s most famous cut is missing. That’s ‘cause Family Affair wasn’t released until a year later, as a track on the Family Stone’s landmark (and fifth) album, There’s a Riot Goin’ On (named in response to Marvin Gaye’s classic, What’s Going On?, which had dropped five months earlier).

It’s not the most accessible of the band’s LPs – Stand is the probably easiest to get into – but it’s the most ambitious, the darkest, the most militant, and the weirdest. It’s pretty clear that during the time of writing and recording, main man Sly Stone, a songwriter, producer and multi-instrumentalist, was very, very high indeed.

His love of being chemically altered eventually did for him and the rest of the Family Stone. They managed to put out Fresh!, which is all parred-down and kinda quiet as if intended as a comedown from the aggressive narcotic of Riot. The things started to go seriously wrong. The group’s seventh studio album, Small Talk (1974), was a bust and everyone went their separate ways. Sly endured, but lost his groove. Amazingly, he’s still alive, despite the cocaine, PCP, lawsuits and general bonkers behaviour, the lucky funker.

Daniel has been a journalist for 15 years, a drinker for two decades, and a music lover all his life. He has worked in print, teletext and online, and has written on a massive range of subjects, from entertainment to the funeral business. He's currently employed as a web editor of a leading trade magazine. Daniel is a northerner, a trencherman, an atheist and a misanthrope. Follow Daniel on Twitter: http://twitter.com/DanielSelwood