Daniel Selwood presents the first in an occasional ‘best of’ series

Kurt Cobain loved ‘em. They were recently described by an unidentified Yorkshireman as “the best band in the fuckin’ world”. Even Liam Gallagher has crawled out of his own arse for long enough to praise them mightily. They rarely trouble the charts, but they’re even less likely to let you down.

They’re Teenage Fanclub, a band of such excellence that even their patchiest work micturates from high altitude on to the current batch of axe-and-drum twerps (which is probably why Kasabian look like they smell of piss).

Since their third album, 1991’s bloody brilliant Bandwagonesque, the Fannies – as they’re affectionately known by those who rightfully adore them – have worked the classic rock sound of chiming guitars and vocal harmonies better than any band since Big Star (who they sometimes resemble on their early work).

Not one album – not a single one! – is worthless. The band’s shambolic debut, A Catholic Education, might sound like it was recorded by a rabble of glued-up 15-year-olds in their school’s canteen, but it opens with two crackin’ tracks: the surf-ish Heavy Metal and Everything Flows, the band’s first (and arguably finest) anthem.

At their best, the Fannies – four Scottish geezers with the not-very-rock-n-roll names of Norman, Raymond, Gerard and Francis – are unrivalled in their ability to sing about girls and feelings and whatnot while making a sound that makes grown men bellow hyperbole without feeling shame (see above).

The quality remains high partly as a result of the way the band work: three songwriters encourage and cajole each other to pen the best tunes they can muster, with each guy getting his three or four finest efforts into the final track list.

Even when they coast, Teenage Fanclub end up being brilliant, be it with their instrumentals (Is This Music, the final cut on Bandwagonesque, was used by Match of the Day to accompany its Goal of the Month section during the late ‘90s – which is a high compliment, for sure) or cover versions (The Beatles, 1910 Fruitgum Company, Orange Juice, The Flying Burrito Brothers and even Madonna have all had the Fannies treatment). 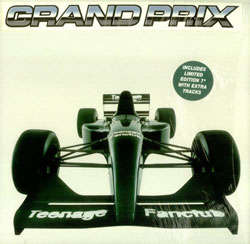 There have been collaborations, too. The weirdest being Fallin’ with De La Soul for the soundtrack of the movie Judgment Night. The best has been the ringingly gorgeous Patti Girl, a 1993 team-up with Alex Chilton that also spawned the frantic Mine Exclusively.

Teenage Fanclub (which is a brilliant name for a band, by the way) haven’t changed much over ten albums (so far), except that the playing has got tighter, the production slicker and the introspection more evident. That’s not a bad thing. In fact, it’s a good thing. A very good thing. Long may they jingle-jangle.

The obvious choice, this. It’s the fans’ favourite from 1995 that both Q magazine and the Observer Music Monthly rated as the 72nd best British album of all time – which is more of an insult than praise given that Grand Prix deserves to be much higher up the charts.

Following the poorly received – though unfairly dismissed Thirteen – Grand Prix was regarded as something of a return to form by the Fannies. (It was the band’s first top ten album.) More controlled and better honed than previous work, it’s also more mature and leaner. The 13 tracks come in at just 42 minutes, but never do they seem rushed. They’re superbly balanced pop songs from the opener, the chunky About You (which segues into the classic Sparky’s Dream), to Hardcore/Ballad, the closer with a split personality.

After you’ve enjoyed this five or six times, have a crack at Songs From Northern Britain, which continues the Grand Prix feel albeit with a touch more acoustic guitar. It’s the album with Ain’t That Enough, the Fannies’ biggest hit. After that, try the rest.

Daniel has been a journalist for 15 years, a drinker for two decades, and a music lover all his life. He has worked in print, teletext and online, and has written on a massive range of subjects, from entertainment to the funeral business. He's currently employed as a web editor of a leading trade magazine. Daniel is a northerner, a trencherman, an atheist and a misanthrope. Follow Daniel on Twitter: http://twitter.com/DanielSelwood