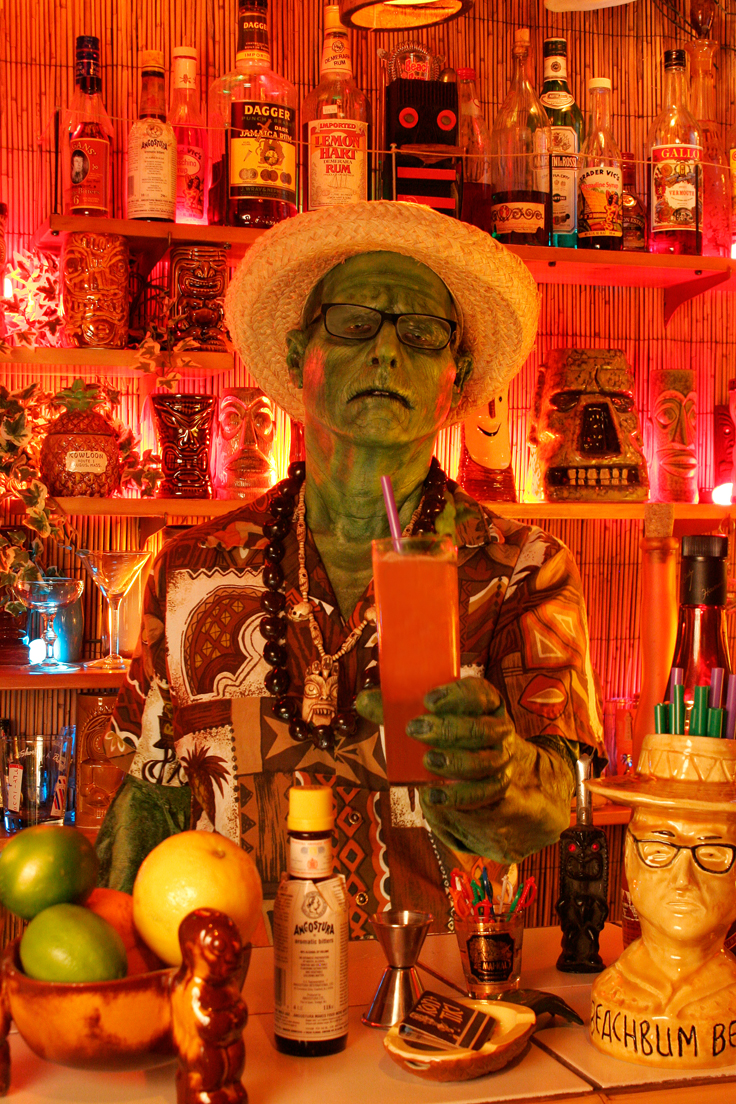 Ever dreamed of owning your own Tiki Bar? Come on who hasn’t? The only problem is how to conquer the world of Tiki. As with anything that looks simple, it quite often isn’t.

Well don’t let your Tiki dreams go the same way as those of playing for England and dating Kylie. Instead turn to the man who has been widely credited for being the force behind the re-birth of Tiki across the world. Mr Jeff Beach Bum Berry is heading over from his home of the states to set up a Tiki School this June and July in Ibiza.

This truly is the chance of a life time to spend a few days with Beach Bum and his friends to discover how to quite literally make your dreams come true. Such a good opportunity in fact that your ever industrious BarLifeUK team decided that a few days in Ibiza hanging around with Beach Bum and drinking Mai Tai’s and Zombie’s till dawn sounded so good we are off ourselves.

Before he jumped on the plane we had a chat with the man himself (no doubt lying next to a pool, umbrella strewn rum cocktail in hand being fanned by bikini clad women) to find out what he has in store for those lucky folks on the course. Jealous? No need to be, there are still a couple of spots available and the details are at the end of this here article.

BarLifeUK: Hi Jeff thanks for your time – for those up and coming Tiki bartenders who don’t know too much about you – who is Beach Bum Berry??

Jeff Beach Bum Berry: He is a freeloading reprobate who lives on rum and the kindness of strangers. He is also one of US Imbibe magazine’s “25 Most Influential Cocktail Personalities of the Past Century,” and the author of five books on vintage Tiki drinks and cuisine. He’s been profiled in the New York Times, and has been featured in the Washington Post, The Wall Street Journal, and W magazine.
More shameless self-promotion:  I also did the cocktail menu for the Luau in Beverly Hills, which the New York Times cited as one of the nation’s 24 “Bars on The Cutting Edge,” and co-created “Tiki+” for the iPhone. My original cocktail recipes have been printed all over the place, they’ve also been served at PDT in Manhattan, the Tabou Tiki Room in Berlin, Smuggler’s Cove in San Francisco, the Tiki Room in Stockholm, Pho Republique in Boston, and Intoxica in Copenhagen, among others. Currently I’m conducting tropical drink seminars and tastings across the U.S. and Europe, and serving on the advisory board of the Museum Of The American Cocktail.

BL: How many Zombie’s did it take to come up with the idea of a Tiki School?

BB: A whole graveyard full.  They rose up out of the earth, poured themselves down our throats, and the next thing we knew we were planning lessons.

BL: What will people learn on the trip?

BB: The curriculum is geared toward professional bartenders, but all Polynesiacs are welcome.  Classes include Tiki History, Tropical Mixology, The Cocktail As Conversation Piece, Tiki Bar Design, Exotica Music, The Theater Of The Bar, and The Bartender’s Sixth Sense, just to name a few.  After you get in touch with your cocktail creativity, saloon economist Jozef Martiniak will offer practical advice on how to financially float the Tiki bar of your dreams.

BL: Is it all learning and studying or are there some fun nights out planned as well?

BB: With Tiki, it’s all fun — even the learning part.  We’re still figuring out all the extra-curricular stuff, but whatever happens, I think it’s safe to say that drinking will occur!

BL: Your partner in crime on this adventure is Stan Vadrna – who the dickens is he and what does he bring to the event?

BB: Stan’s an award-winning mixologist who opens award-winning bars — when he’s in one place long enough.  Usually he’s traveling the globe, teaching the “Ichigo-Ichie” philosophy of Japanese bartending and the art of “Sprezzatura” hosting.  Just about everyone I’ve met in the cocktail world is passionate about what they do and what they drink, but Stan takes it to a whole new level of intensity.

BL: BarLifeUK will be coming to join you for a few days do we need to bring our own grass skirts?

BB: Grass skirts are recommended, yes.  And don’t forget your coconut bras.  We’re right on the beach, too, so swimming gear as well…..

BL: Thank you sir, anything important we’ve forgotten to ask?

Sounds good doesn’t it? Well book yourself up a slot on the course then visit the Tiki School Website

For more info on the man himself, to buy his books, download his iPhone app and much more visit his website here