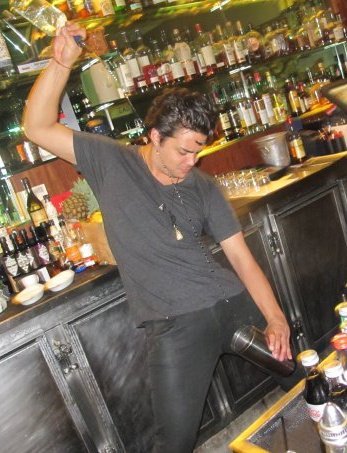 It is always sad when a good bar shuts down, and when the bar in question has been the epicentre of a nation’s bar community for as long as there has been one, then it is a real tragedy. It was with heavy hearts that we heard that the institution that is the Bayswater Brasserie in Sydney, Australia has closed its doors. But, alas, having been open for over 25 years, the Bays was recently sold by long time owner Nigel Lacy, and the institution has come to an end.

For any of you who have been fortunate enough to visit Sydney you will have invariably spent at least one night in the bar so difficult to leave, it often seemed to have its own time zone.

The Bays has seen some of the world’s best behind its bar and the list is far too numerous to name everyone, but it includes Naren Young, Gregor De Gruyther and Bartender magazines Bartender of the Year 2008 Charlie ‘Chino’ Ainsbury (and a special mention for the often unsung hero Lenny).

Rather than the usual list of awards and a couple of drunken memories we thought it only right to let one of its longest serving bartenders Charlie to describe what the bar meant to him and the rest of the Australian bar industry – over to you Chino and thanks everyone there for some truly memorable (yet fuzzy) nights….

The first thing that comes to mind with Bayswater is that it was home.

Not just because I was there nearly every day of the week for at least 12 hours a day, pouring my heart into that place. It was a base for a lot of people, especially bartenders. Everyone knew it was a bartenders bar, and it was a honour for me to become manager of that bar. As manager I didn’t just want it to be a great cocktail bar, which it is, but a place where anyone could get a solid drink, a properly made gin & tonic, a manhattan, a cold beer etc.

Despite the now thriving bar culture in Sydney, Bayswater was the only real bar to me, one of the only places where you could sit at the bar comfortably on a bar stool and get a great drink, not a lot of bars provide that experience, there are even bars in Sydney where there are no fucking bar stools, how ridiculous is that?

The other great thing about Bayswater Brasserie Bar was it’s ability to transform throughout the week. Early week had jazz, a proper cocktail crowd, and the usual pre and post dinner rushes, maybe a couple in for some oysters and champagne.

Maybe Frank would be making pleasant conversation with a friend while sipping on a martini (not just a wet bombay with a twist I’ll have you know) throw in some bartenders perched on the stools picking out or carefully chosen selection of fine rums, whiskies of the world, always 100% blue agave tequila, amongst interesting things friends found on their travels.

To go on a tangent, I fucking love our back bar. And to me it was never a fact of showing off, I would gladly give anyone a taste of anything we had. But if friends came in and we happened to pick up a bottle of Rye, Manhattans for all! It was about sharing, being united with a fine drink.

But then nearing the end of the week of course we’d get busier, more trade and more crowds. Eventually no bar in Kings Cross could avoid, well, Kings Cross. The crowds would flock to the red light district and fill up that strip before sunset. Even our drink haven hidden at the back of the restaurant couldn’t avoid the zoo outside.

But we would accept it, before you know it the parties would show up, our resident DJ would let loose and we’d have ourselves a memorable friday or saturday night. Sure, we made more crappy drinks on the weekends but I can still recall being 5 deep on some weekend night, stirring and stirring 6 woodford old fashioneds, or maybe making a round of ramos gin fizzes in our XL cocktail shaker, passing it down the bar for everyone to have a shake.

I remember on one of my last nights I filled up our absinthe fountain with ice to make a Brooklyn on tap, here’s a cocktail glass! I remember our NYE nights lining the bar with flutes to pour bubbles for one and all. I miss the nights turning around at the stroke of 2am and popping a beer for the staff, toasting another battle against the weekend warriors.

I miss sitting at the bar after work with your team at some stupid hour in the morning counting out the tips and laughing about the night.

That bar has seen a lot, and you can tell by looking at the dented stainless steel work stations and that zinc bar top, the tokens over the back bar, the pictures of friends and family out the back, the dusty awards shelf, the scrapes on the foot rail, the a little too tired glass washer, the ‘high-heel bruised’ coffee table…

That bar belonged to a lot of people.

A lot of memories…

As we were posting this story it came to light that another institution in the southern hemisphere has also had its final night (in its current incarnation anyway) New Zealand’s Matterhorn which has helped give the world Mr Jacob Briars and has over the years served some of the finest cocktails in New Zealand. A sad day for Wellington’s bar community but congratulations to the guys there for selling it on after a lot of hard work and I am sure the send off party was one to remember!!!!